Hydrogen is being increasingly explored as an alternative to carbon-based fuels but there are still safety challenges to meet, before we can integrate hydrogen technology into future civil aviation aircraft.
The ENABLEH2 safety work package (WP4) intends to meet some of these issues head on, filling in knowledge gaps in the literature, and exploring some of the real-world implications of using this fuel.
The main objectives are:

A Preliminary hazard Analysis approach has been taken to explore the hazards associated with the use of liquid and gaseous hydrogen in aircraft. A liquid hydrogen propulsion system would have cryogenic and flammable hazards, so leaks would pose many problems. Systems would have to withstand the mechanical issues associated with liquid fuel, and pressure rises as fuel converts to gas, and still maintain integrity. Identified gaps include knowledge of large-scale leaks and hydrogen ignition risk across the flight profile. Technology development will be needed for fire & explosion protection and leak detection. There are also broader aviation issues such as concerns around impact and vibration, and the long-range and multi-trip use of aircraft.
These findings are being used to advise other ENABLEH2 work packages on the project in relation to safety of aircraft systems.

The WP4 team have designed a novel apparatus (see Figure 1), nicknamed “Boreas’ after the Greek god of the North Wind. The apparatus combines a pressure vessel with a refrigeration system to test flammability at the low pressures and temperatures found at altitude. The apparatus has now been commissioned and over the next year a range of experiments will be conducted, to define hydrogen ignition parameters.

FLACS CFD modelling has been used in a range of studies to explore hydrogen safety versus other fuels. Modelling to simulate large scale LH2 releases (such as that in Figure 2) has been used to predict pool size, flammable limits, and the flammable mass of the hydrogen-air clouds formed for different scenarios and using different mitigations (Holborn, Benson, and Ingram 2020a).
The CFD model has also been used to examine crash scenarios for a range of fuel types. Results suggest that the spills of cryogenic fuels – LH2 and LNG – produce high intensity, short duration pool fires, similar in nature to a fireball. By comparison the JET A-1 spill is predicted to produce a pool fire with a lower peak heat release rate, but with sustained burning over a longer period of time.
Work has also been done to explore accidental LH2 spills occurring during aircraft refuelling operations (Holborn, Benson and Ingram 2020b). The results suggest that generally the magnitude of the overpressure produced is typically relatively low. However, in a few scenarios, where ignition of clouds formed under the body of the aircraft, results indicate the potential for flame acceleration to occur (shown in Figure 3). This information will be invaluable for aircraft and airport design to reduce the risk of hydrogen ignition hazards. 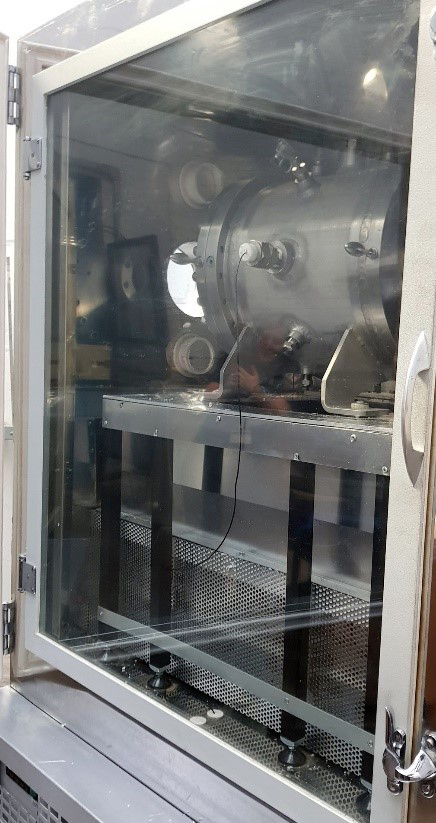 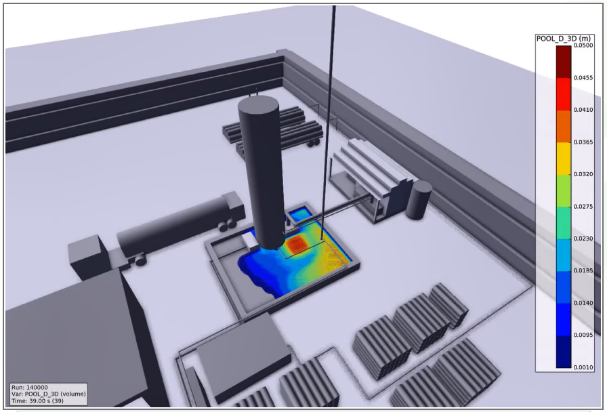 A safety workshop to explore hydrogen use at a major world airport was held at Heathrow Airport. The workshop included aircraft manufacturers, airlines, hydrogen industry specialists and fire professionals. The discussions considered storage and on-site generation, fuelling and ground support, taxiing, take off and lander, and firefighting. This resulted in the production of a Preliminary Hazard Analysis to highlight the major areas of concern at an early stage and identify areas of existing synergy. On safety it was judged that for storage and taxiing, take-off and landing issues, many of the problems and associated mitigations would be similar to now, or already exist in other industries. Scale and infrastructure was the biggest concern around storage. Discussions on fuelling revealed a high degree of uncertainty in relation to how fuel would be supplied (e.g. vehicle deliver, robots, piped). Larger scale cryogenic and fire hazards were a concern. Firefighting was identified as an area that would require a large degree of change, including fire-fighting protocols, training, and available equipment for the whole fire service to enable support in the event of a major incident. However, it was concluded that much work has been done to identify firefighting methods and requirements and the answers are likely to already exist.

WP4 team members have created a safety management plan, and a library of hydrogen safety standards and guides, in order to maintain safety across our laboratories using hydrogen. These cover basic knowledge of hydrogen hazards, and processes for risk assessment, reporting risks and consulting with hydrogen specialists on the project. These have been used to aid in the design of the novel hydrogen systems and apparatus, and to assess the safety of hydrogen use in our facilities, improving safety for all our team.

Through workshops and publications, we are sharing the information with a variety of industry and academic experts in order to help them identify safety issues around hydrogen use. Three workshops have already been organised: Heathrow airport safety workshop in February 2019, Online safety preliminary Hazards Identification workshop in November 2019 and Advising WP1 Aircraft design workshop in January 2020.

WP1 has reviewed developments in H2 production and infrastructure and made projections for the long-term costs of alternative fuels. Four LH2 aircraft configurations have been selected for detailed studies (one “more conventional” and one “maximum synergy” configuration each for a typical short-medium range and long range mission). These concepts were down-selected from several aircraft configurations via a rigorous quality function deployment exercise. Assessments of reference aircraft utilising Jet A-1, biofuels and LNG is almost complete.

WP2 has developed tools for the conceptual design and performance analysis of fuel system components. The design of the rig to investigate the potential of core flow cooling with cryogenic H2 has been completed and parts are being manufactured. The down-selection and design of preferred heat management systems and fuel tanks is also underway.

Within WP3, comprehensive CFD-based studies (comprising design space exploration, emissions and thermoacoustic assessments) have been completed and have highlighted limitations, uncertainties and significant discrepancies between H2 and air mixing and combustion models of 3 state-of-the-art commercial combustion CFD codes. These models will be further evaluated, validated and calibrated based on the results obtained from the experiments. The design and commissioning of the rigs are underway.

In WP4 a review of aeronautic and H2 industry safety synergies, conflicts and knowledge gaps, and preliminary hazard analyses of laboratory and aircraft systems has been completed. A safety management plan has been issued. Experimental studies are currently underway. The safety of LH2 at airports, has been assessed via a Preliminary Hazard Analysis workshop held at Heathrow.

As part of WP5, a dedicated project website and community management tool have been set up to engage with the IAB members in a formal capacity. Twelve key technology research strands have been identified for the introduction of LH2 for civil aviation as part of a preliminary roadmapping exercise.